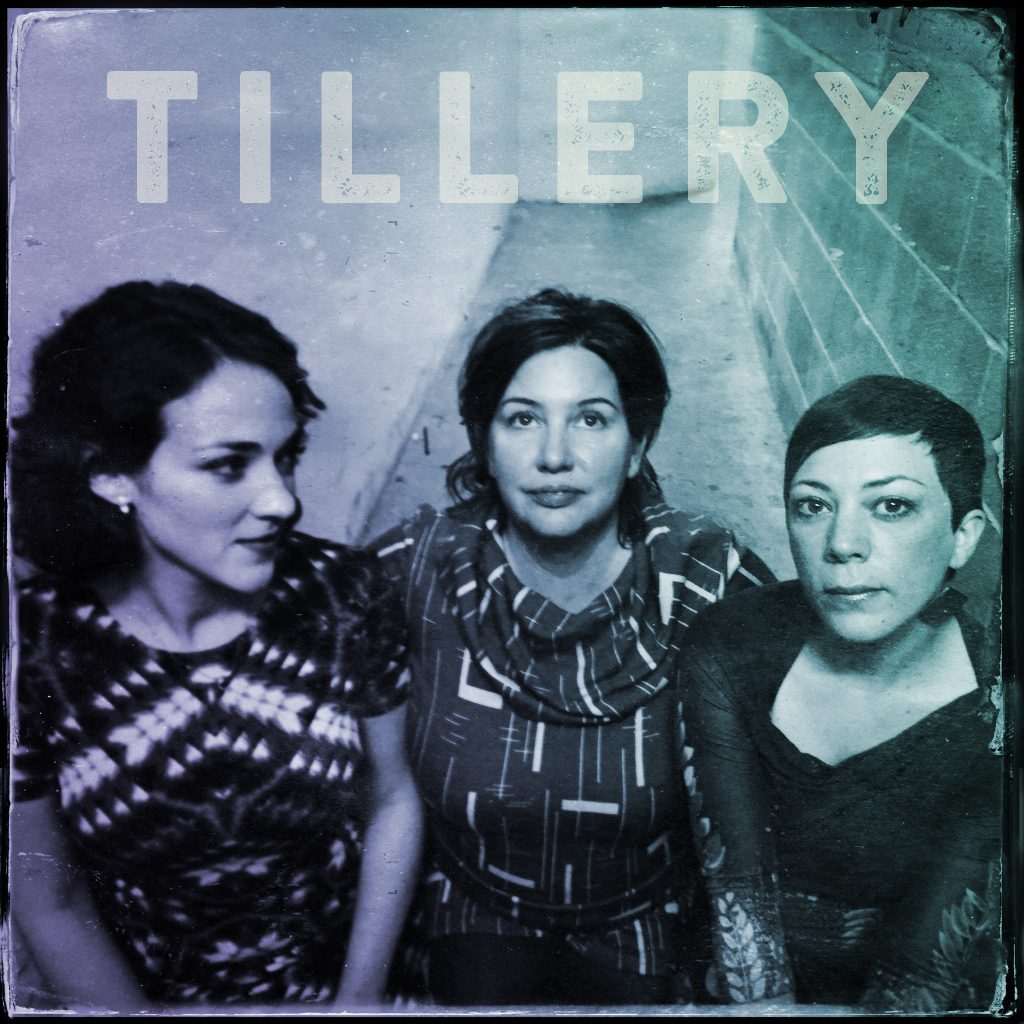 
Tillery is a uniquely gifted trio that combines the diverse talents of three respected vocalist-songwriters, Becca Stevens, Rebecca Martin, and Gretchen Parlato. Individually, each is well established as a distinctive creative force with an impressive body of work to her credit. Together, on Tillery’s long-awaited, self-titled first collective album, the three artists tap into a powerful collaborative chemistry that’s more than the sum of its considerable parts.

Having honed their deep musical and personal rapport by sharing stages and songs over the course of several years, Tillery has captured its organic essence on the 11 song album, with Stevens, Martin, and Parlato combining their formidable vocal and songwriting talents to create beguiling, emotionally precise new music.

“Tillery is a slow-burning kind of project,” Parlato says of the group, which began performing informally in 2010. “We waited to record an album until we felt we had a nice amount of material to share. Playing and performing together for so many years definitely helped us develop our sound and repertoire.”

Tillery’s sound incorporates three distinctive voices along with spare, mostly acoustic instrumental arrangements, while the threesome’s repertoire encompasses such unforgettable originals as Martin’s “God Is In the Details,” Parlato’s “Magnus” and Stevens’ “No More,” as well as personally charged readings of songs from such diverse sources as Prince, Father John Misty and the Jacksons. The resulting album spans the emotional spectrum, embodying the musical depth and emotional rapport that make Tillery so special.

North Carolina bred, Brooklyn based singer/composer/multi-instrumentalist Becca Stevens has already received copious praise from the likes of The New York Times, describing her as “a best-kept secret” and “impressively absorbing.” Drawing upon elements of pop, indie-rock, jazz, and traditional Appalachian folk, Stevens has been hailed for her unique ability to craft exquisite compositions both for her own band, and for artists who run the gamut of genre from the legendary David Crosby, to singer José James to classical pianist Timo Andres. Stevens has toured the world with her band and collaborated with the likes of Brad Mehldau, Esperanza Spalding, Billy Childs, Ambrose Akinmusire, Jacob Collier, Vijay Iyer and many others. In April 2015, Perfect Animal, the highly anticipated follow up to Weightless(Sunnyside), produced by engineer Scott Solter was released on Universal Music Classics. Becca’s music is featured on the latest Snarky Puppy Family Dinner Vol 2 and she is currently working on her new album Regina to be released in early 2017.

Maine-born Rebecca Martin is a widely respected and critically acclaimed two-decade veteran whose wide-ranging vocal and songwriting talents have allowed her to effortlessly straddle the worlds of jazz and pop. She has recorded with some of the world’s most esteemed musicians, including Brian Blade, Paul Motian, Kurt Rosenwinkel, Guillermo Klein, Jeff Ballard, Jesse Harris, Steve Cardenas, Pete Rende, Bill McHenry, Kenny Wollesen, Ben Street and Martin’s husband, bassist Larry Grenadier, releasing eight albums that showcase her indelible voice and supple guitar work. Martin’s most recent album of originals Twain reached the number one spot on both iTunes and Amazon in France and was selected as one of the best albums of 2013 by iTunes. As an activist, Martin created the platform KingstonCitizens.org a decade ago, recently driving out a national bottling company who proposed a plan to bottle and to sell the area’s municipal water source. She is currently finishing a recording of a new collaborative project with the composer Guillermo Klein called “The Upstate Project” that features Larry Grenadier and Jeff Ballard to be released on Sunnyside Records in February of 2017.

Native Californian Gretchen Parlato has emerged as one of the most inventive and mesmerizing vocalists of her generation. Maintaining top status and world wide critical acclaim, Parlato has lent her voice to more than 75 albums, performed and recorded with musicians such as Wayne Shorter, Herbie Hancock, Kenny Barron, Esperanza Spalding, Terri Lyne Carrington, Terence Blanchard, Marcus Miller, and Lionel Loueke. Parlato has released four solo albums, her most recent LIVE in NYC cd/dvd received a GRAMMY nomination in 2015 for Best Vocal Jazz Album. Her 2011 release The Lost and Found received over 30 national and international awards including Jazz Critics Poll #1 Vocal Album of 2011 and iTunes Vocal Jazz Album of the Year. Parlato currently teaches Jazz Voice at Manhattan School of Music.

The three kindred spirits first joined forces in 2010, when they met and instantly became fervent admirers of each other’s work, striking up a personal bond as well as a creative collaboration. The partnership was initially set in motion when a mutual friend brought Parlato to one of Martin’s performances at Manhattan’s Jazz Standard.

“Rebecca’s voice and songs brought me to tears,” Parlato recalls. “She has such a warm, loving energy, and I immediately felt like she was someone I wanted to be around and share my time and music with.”

The same friend had also been singing the praises of Becca Stevens to Parlato, inspiring her to attend one of Stevens’ shows at Manhattan’s Cornelia Street Cafe.

“I was in complete awe of her,” Gretchen notes. “She has the kind of intensity that, from the very first sound out of her mouth, you know that something deep is happening. We got to know each other better when we sang together in Taylor Eigsti’s band Free Agency. We realized that we understood and processed music in the same way, and that we laughed and joked about the same things. And knowing both Rebecca and Becca, I felt like their energies would relate and bond.”

Stevens, meanwhile, had been a longtime fan of both Martin and Parlato. “They were the women in jazz whom I could admire when I was coming up,” she says. “I felt totally humbled by the brilliance of Gretchen’s craft, so when she came to my gig, I was really flattered. I had a similar feeling when, after being aware of Rebecca for so many years, she sent me an email out of the blue introducing herself. I finally met her at Cornelia when I went to one of her shows. Gretchen was there too, and the three of us took a picture together after. I laugh when I look at that picture now, because even then, we had the same goofy, spontaneous energy that we have now.”

When the three artists subsequently got together for an all-girl getaway weekend at Martin’s house in upstate Kingston, NY in late 2010, it seemed inevitable that they would end up making music together.

“At some point, I picked up my guitar and said ‘Let’s sing something,’ and that was it,” Martin recalls. “There wasn’t any thought put into it. It just happened, and it just made sense.”

“Rebecca taught us one of her songs, and then another,” Stevens remembers. “The three of our voices and the warm receptive energy in the room created this sound that was like…love butter. You just want to spread it all over everything.”

A week later, Gretchen and Becca joined Rebecca on stage to sing a few songs at her record-release party, and it quickly became apparent that the informal arrangement demanded further exploration. The trio made its official debut at the Cornelia Street Cafe in January 2011, initially billing the group as Girls Gone Mild before adopting Tillery (also the title of a Stevens composition) as their permanent monicker. They booked shows when their schedules allowed, including a prestigious 2013 performance at the Kennedy Center in Washington, D.C.

“We initially gave our group a funny name, because our main intention was to have fun,” Martin notes. “The music, however, had other plans. The moment we started to sing together, we realized there was much more going on, and that it had a mysterious siren sound quality to it. It didn’t take long before we felt we needed a name that sounded beautiful, rolled off the tongue and left room for interpretation. I had loved the word ‘Tillery,’ which was the title of one of Becca’s songs.”

“Tillery,” Stevens explains, “was the last name of a dear friend of mine who inspired my music a lot. Naming this trio after her seemed like a really cool way to honor her life.”

“Making a record wasn’t ever a part of our thought process when we first discovered that we could make music together,” Martin asserts. “It was initially just something that we was inspiring and fun, and an extension of our budding friendship. We are now in our sixth year of friendship and music. When we sing together, everything locks in quickly to make a single sound that moves outward in a very powerful way. That was always the case, but it’s become more effortless over the years. There are moments in almost every song where our voices meld so beautifully that I can get a little dizzy.”

“Each of us may have differing sounds and ideas in our own projects, but Tillery has always had its own specific atmosphere,” adds Parlato, who was eight months pregnant while recording Tillery. “To me, nothing about this group has never needed discussion or strategy; it just is.”

“Tillery,” Stevens continues, “is a collaboration of friendships. Three people who love one another who happen to have three separate musical identities, joining together in a unique collaboration. Each time we play together, the music feels deeper than the time before. We’ve managed, without really trying, to maintain the same energy that we felt together that first night that we sang together at Rebecca’s house. I think there’s something really refreshing about a performance where the performers love and admire each other so completely.”

“We all just take this project as it comes,” Parlato concludes. “It’s all very natural and nothing is forced, and because of this, we always approach it with open arms, open hearts. There’s no pressure to do or create anything. It just happens when it happens. It’s always magical, and it always feels like it was meant to be.”